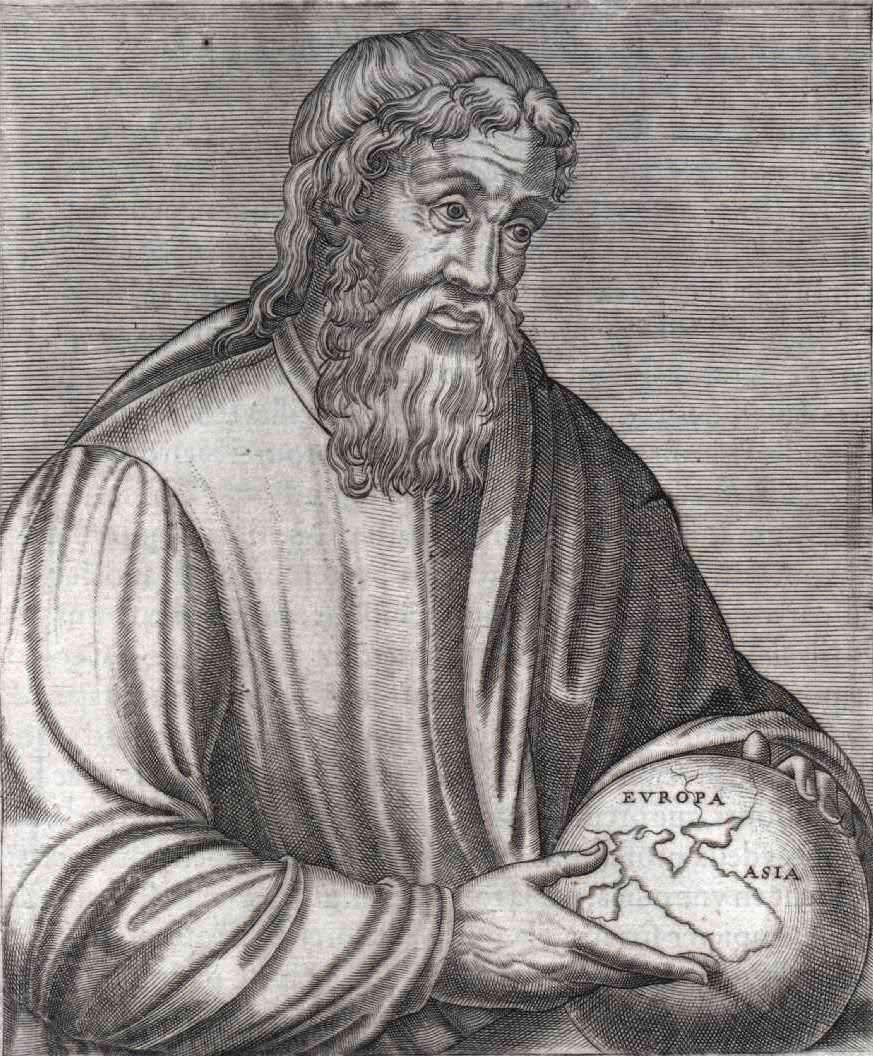 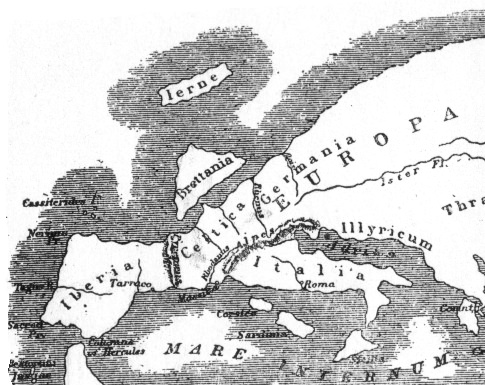 Map of Europe according to Strabo.
Source here.

One of the earliest surviving testimonies of mutual perception between the peoples inhabiting the territories of the modern states of Greece and Portugal can be found in Geographica, an encyclopaedia of geographical knowledge written by Strabo (ca. 64 BCE–ca. 24 CE), an educated citizen of the Roman Empire of Greek descent. He was born in what is nowadays Turkey but spent much of his life travelling through various parts of the empire, which back then was the political entity that exerted sovereign authority over large stretches of land across Europe and around the Mediterranean, including what constitutes the territories of Greece and Portugal nowadays.

Geographica is a detailed description of the entire world known to that time and is divided into seventeen books, the third thereof focusing on the Iberian Peninsula, which back then went by the name Hispania. Portugal exists today in parts of what used to be the Roman provinces of Lusitania and Gallaecia, in the southwest and northwest of Hispania, respectively. Even though there are no records of Strabo ever visiting the region, the book describes it with a considerable amount of detail. Along the descriptions of topographical features and natural resources of that corner of the empire, Strabo delves into characterizing its autochthonous peoples. According to him,

“The Lusitanians are reported to be clever in laying ambushes, sharp, swift of foot, light, and easily disciplined as soldiers.” 1

Strabo speaks of a more or less savage folk, a quasi guerrilla, with a strong connection to the land and able to catch the enemy by surprise. The language unveils preoccupations of a military nature, hinting on local resistance to Romanization. Other passages reveal a gaze more akin to that of anthropology; a process of subjectification of the natives mostly concerned with their dietary and hygiene habits, as well as religious rituals:

“[…] some of those who dwell near to the river Douro2 imitate the Lacedæmonians3 in anointing their bodies with oil, using hot air-baths made of heated stones, bathing in cold water, and taking but one tidy and frugal meal a day.” 4

“All the mountaineers are frugal, their beverage is water, they sleep on the ground, and wear a profuse quantity of long hair after the fashion of women, which they bind around the forehead when they go to battle. They subsist principally on the flesh of the goat, which animal they sacrifice to Mars, as also prisoners taken in war, and horses.” 5

Strabo finishes the chapter by pointing out the peripheral condition of the region as a justification for the rustic character of its people:

“The rough and savage manners of these people is not alone owing to their wars, but likewise to their isolated position, it being a long distance to reach them, whether by sea or land. Thus the difficulty of communication has deprived them both of generosity of manners and of courtesy.” 6

Overall, the language unveils a particular gaze that one can relate to that of the 18th and 19th century European expeditions into the African continent; a patronizing gaze that, even if at times admitting uncertainty, does not fall short of speculating on possible interpretations for the habits of the natives. But what I find most interesting about all this is the name of the geographer itself: Strabo means squint, or cross-eyed, as in Strabismus.

Strabismus is a curious condition. It interferes with binocular vision by preventing a person from directing both eyes simultaneously towards the same point. It is usually congenital and is not necessarily associated with decreased vision from any of the eyes–at least in a first stage. As the eyes of a strabismic individual do not properly align with each other, the condition may lead to double vision. In order to avoid this, the brain often adapts by ignoring the signal from one of the eyes–typically the deviated one. In this case, usually no noticeable symptoms are experienced other than a minor loss in depth perception–which may not even be noticeable by someone who has had strabismus since birth or early childhood, as they likely learned to judge depth and distances using monocular cues. On the long run, though, the constant suppression of one eye may hinder its development resulting in a deterioration of the vision of that eye–amblyopia, commonly referred as “lazy eye”.7

While Strabo was not an uncommon name among Greeks at the time, the Romans seem to have employed the term as a cognomen for anyone whose eyes were distorted or deformed.8 There’s no evidence that Strabo had any sort of eye condition but the mere fact one can entertain that possibility gives the very idea of intercultural gaze a rather ironic perspective. The strabismic subject is paradigmatic of the role of the gaze in the construction of subjectivity. I shall explain this later on. First it might be important to gaze upon the concept of gaze itself.

French existentialist philosopher Jean-Paul Sartre is often credited for having first established the connection between the function of the eye and the construction of the self. According to him,

In simpler words, I come into being as a self on the very moment I realize someone is looking at me. The Other’s look, his gaze, is the very production of the self. For Sartre, the role of the eye seems to operate on an ontological level.

Influenced by Sartre’s findings and, perhaps most importantly, by the Freudian articulation of human behaviour in terms of drives, Lacan later defends a different, pre-existing and externalized gaze. “I see only from one point, but in my existence I am looked at from all sides,”10 is an often-quoted line used to illustrate his position, even though it falls short in framing his broader thesis, which is based on an articulation of gaze not in terms of vision per se but in terms of desire. Where Sartre sees a binary–the subject and the Other11 –Lacan sees a triadic model: the subject (the one who sees), the visual object (the Other who is seen), and the gaze (a third locus).12 The gaze is the unconscious desire or, as Lacan calls it, the objet a (objet autre, French for “object other”), “something from which the subject, in order to constitute itself, has separated off as organ. This serves as a symbol of the lack, that is to say, of the phallus, not as such, but in so far as it is lacking.”13 Slavoj Žižek gives a good definition:

“This is objet a: an entity that has no substantial consistency, which is in itself ‘nothing but confusion,’ and which acquires a definite shape only when looked upon from a standpoint distorted by the subject’s desires and fears […] objet a is the strange object which is nothing but the inscription of the subject itself into the field of objects, in the guise of a stain which acquires form only when part of this field is anamorphically distorted by the subject’s desire.” 14

“The first [triangle] is that which, in the geometral field, puts in our place the subject of the representation and the second is that which turns me into a picture. On the right-hand line is situated, then, the apex of the first triangle, the point of the geometral subject, and it is on that line that I, too, turn myself into a picture under the gaze, which is inscribed at the apex of the second triangle. The two triangles are here superimposed, as in fact they are in the functioning of the scopic register.” 15

Strabo’s Geographica is precisely the screen Lacan tells us about, where the representation of the natives of Iberia is projected together with Strabo’s own desires. His gaze is a reinforcement of his own cultural identity. By othering the native people of a faraway land, Strabo perpetuates the very concept of a Greek culture. What he is saying is “we are not them”, or “Greece is not Portugal.”

Earlier I stated that the strabismic individual is paradigmatic of the role of the gaze in the construction of subjectivity. If one considers that the psychosocial symptoms of strabismus are often more pronounced than the strictly optical ones, we might get a glimpse why. The strabismic person sees the world clearly just like the well-sighted does, but by virtue of his awareness that his condition renders him different, he is more prone to be conscious of the gaze of the Other.

With this in mind, let us conceive of strabismus not as a hindrance but as a capacity. Let us consider the strabismic individual as an empowered subject, armed with a unique binocular vision that despite–and by virtue of–rendering him different from the Other, allows him to apprehend the world permanently through a double perspective: while the aligned eye fixes it from a standard viewpoint sending visual signals to the brain to be interpreted as images, the unaligned eye allows the subject to apprehend the world through unvisual signals. Even though the brain doesn’t register these signals as images, they are nevertheless projected onto the screen of the visible, giving the world the shape of the subject’s subjectivity.

In this speculative construction, the unaligned eye of the strabismic subject evolved by natural selection to become a super-eye. It is the eye of the objet a, a built-in Lacanian gaze. The lazy eye of the Southern, crisis-ridden subject is not lazy anymore. It can move freely within its orbit and occupy any eccentric position in order to enhance the realm of the strictly visual with deviant subjective angles.

This dissertation is arranged in such a binocular fashion as a reaction to the gaze of Strabo himself. It intercalates passages from the journal of my trip to Athens (which took place between 1 March and 30 April 2016) with eccentric, unaligned perspectives that I matured on after returning form that trip. In the context of the current European identity crisis, I believe such a perspective might be fit for a proper understanding of the current state of affairs.

This text is adapted from Portugal Is Not Greece: Strabismic Gazes on the Peripheral Condition, my final dissertation for the MFA Public Art and New Artistic Strategies at the Bauhaus-Universität Weimar.

[1] Strabo, Geographica. Book III, Chapter III, Section 6.
[2] The natural border between the provinces of Lusitania and Gallaecia.
[3] Or Laconians, the inhabitants of Laconia, a region in the southeastern part of the Peloponnese peninsula in Greece, which administrative capital is Sparta.
[4] Strabo, Geographica. Book III, Chatper III, Section 6.
[5] Ibid. Section 7.
[6] Ibid. Section 8.
[7] Medical facts about Strabismus found on Wikipedia.
[8] Pothecary, Sarah. Strabo the Geographer: His Name and Its Meaning. In Mnemosyne 52 (6). 1999. p. 691. Available here.
[9] Sartre, Jean-Paul, Being and Nothingness, trans. Hanzel E. Barnes, The Philosophical Library Inc., 1993, p.257.
[10] Lacan, Jacques, The Four Fundamental Concepts of Psychoanalysis, p.72.
[11] As Richard Boothby put it, Sartre grounds his theory on the Hegelian dialectics of master/slave. “This binary model raises a number of problems, among which is Sartre’s tendency to assume an either/or relation between the two poles it identifies: either the other retains his rights as a subject by objectifying me with his look, or he is himself rendered an object under my look.” In Richard Boothby, Figurations of the Objet a, In Jacques Lacan: Critical Evaluations in Cultural Theory (II), ed. Slavoj Zizek, New York: Routeledge, 2003, p.169.
[12] Ma, Yuanlong. Lacan on Gaze. In International Journal of Humanities and Social Science. Vol. 5, No. 10(1). October 2015. p.127.
[13] Lacan, Jacques, The Four Fundamental Concepts of Psychoanalysis, p.103.
[14] Zizek, Slavoj, Troubles with the Real: Lacan as a Viewer of Alien. 2009. Available here.
[15] Lacan, Jacques, The Four Fundamental Concepts of Psychoanalysis, pp.105-6.